As previously mentioned, I’ll be taking the Burnley & Trowbridge brunswick workshop in May.  Of course, I had to immediately scour my sources to find information about this garment, which until about 2 days ago was a relative mystery to me!

Aileen Ribeiro, in Dress in Eighteenth-Century Europe, writes that a brunswick or “German Habit” was, “A long-sleeved version of the sack, usually three-quarter-length and with a high neck and a buttoned, unstiffened bodice…. widely worn in Germany in the middle of the century” (146).  Colonial Williamsburg’s glossary of colonial lady’s clothing says a brunswick is, “A three-quarter length jacket worn with a petticoat, the Brunswick was an informal gown or a traveling gown. It had a high neck, unstiffened bodice that buttoned, long sleeves, and frequently had a sack back (loose pleats) and a hood”; while a jesuit is, “Similar to the Brunswick, but the skirt of the gown was full length.”

The style appears to have been most popular in the 1760s. They were cut like a sacque gown, with the full box pleats in back.  The full length sleeves were made by connecting the usual elbow-length sleeves (complete with sleeve ruffles) to a separate lower sleeve.  According to posts on the 18cwoman list, this was because they were made by mantua makers, who did not use the technique of a shaped long sleeve (used by tailor’s on men’s garments); the separate lower sleeve allowed the sleeve to fit the elbow. Ribeiro writes that while early sleeves had a break at the elbow with a ruffle, by the end of the 1760s that was replaced with a small ruched cuff (although it is unclear whether she means that the elbow ruffle was replaced, or whether that was dropped and the ruffle is now at the cuff) (146). According to the information provided to those of us taking the workshop, brunswicks were not worn over any skirt supports (ie side hoops or bumrolls), although I have found one image (below) of what is probably a jesuit worn over side hoops.  It appears that most are high necked, although at least one of the confirmed brunswick images (Sophia Pelham) has a lower neckline; there are other possible brunswicks/jesuits with low necklines as well below.

Barbara Johnson’s Album includes two relevant fashion plates, one of each style. The brunswick has military-esque folded back revers with buttons.  The jesuit is very similar, except for a longer length overskirt.  Both have the usual petticoat ruffle and loopy-patterned ruches that you’d expect to see on a 1760s sack, as well as straight ruches along the overskirt openings.  There is one swatch for a brunswick:  “a Manchester Brunswick twelve yards” from 1772; the fabric is a small blue and white check, which reminds me of a modern gingham.

Here is a gallery of images of probable brunswicks or jesuits. Most of the fabrics appear to be silk taffeta or satin, although there is one cotton print. 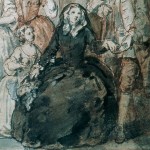 Hogarth, before 1764 (1730s-50s?). Detail from a Study for a Family Portrait. Possible brunswick or jesuit? It’s hard to determine the skirt length. 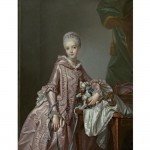 Portrait of a Girl Holding a Spaniel, Roslin, 1740s or 1750s? Probably a jesuit, based on the length. Note that it’s worn over panniers! Sothebys 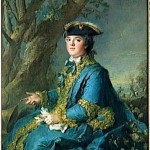 Nattier, 1750s. Louise-Elisabeth de France, Duchesse de Parme. This could be a brunswick or jesuit, based on the sleeves, although I don’t see a hood. Gogmsite 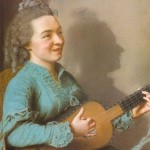 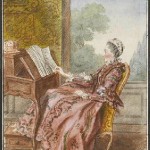 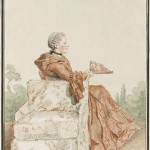 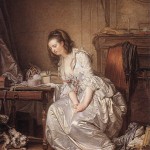 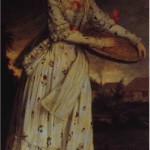 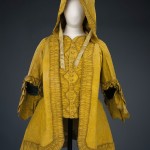 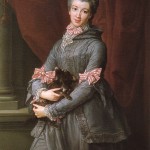 Carmontelle, 1767. Segur. A jesuit? I can see a hood, although whether those are long sleeves or mitts is hard to tell. Wikimedia Commons 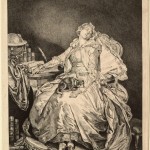 Your Hot 18th c Boy of the Day