This dress originally intended to be Gwendolen’s gorgeous lavender striped day dress from Daniel Deronda, especially once I found the perfect striped silk shantung in the garment district. I ordered the Truly Victorian 1870 trained skirt pattern as it seemed like the perfect base for the skirt. And started sewing this for Costume College 2007 — when I was foiled by my lack of a perfect gala dress! There was just nothing that was quite what I wanted to wear. So I kept working on the skirt, and tried to ignore the early 1870s fashion plates that kept singing their siren song – but finally I caved.

The main issue was what to wear underneath. The siren call of 1870-71 was hard to resist, but I didn’t have the bustle/hoop combo worn in those years, and I didn’t have the time or money to make one. Finally, I hit upon the solution of wearing my standard mid-1870s/80s bustle with my full 1870s bustle petticoat – but I used bias tape to make casings in my bustle petticoat in which to run hoopwire. I put one row just below the bottom flounce, and another about 10-12″ higher. I had to mess a bit with it to figure out how to get it to shape correctly, as my petticoat was gathered up on the hoop (found out that, weirdly, if I gathered the bulk of the petticoat in back, it worked; if I gathered the petticoat in front, the hoop swung forward). I also made a plain cotton trained petticoat from the same pattern as the skirt to wear over my bustle and bustle petticoat.

The skirt is basically the Truly Victorian pattern, although I added the velvet ribbon ties (based on the 1870 fashion plate) to keep the pouf properly poufy. I added a pleated frill around the hem, pleating it so that the lavender primarily shoes with the white peeking out. I wanted to avoid redoing the same trim as my candy cane dress, and when I saw some early bustle era fashion plates with a puffing along the hem, I was sold. The flat velvet ribbon was there to tie in with the ties in back. I gathered up a 12″ strip of muslin and sewed it underneath as a hem guard.

I wanted the bodice to be simple, and considered making it in the 1870 round-waisted style, but decided that that wouldn’t be terribly flattering on me — so added a bit of a basque with two points in front and back. I draped the bodice, based on my custom-draped pattern for my candy cane evening bodice. The 1874 fashion plates, with the puffing on the bodice, tied in so nicely with the skirt puffing that it looks like I planned it! There was a LOT of futzing with the puffing, as I didn’t think too clearly when I cut out the bias strips and realized after the fact that the Vs didn’t match at CF and CB – sigh, recut, resew. I added a narrow velvet ribbon to the bodice to tie in with the velvet ribbons on the skirt. The bodice is piped along the edges, armscye, and sleeve hem. I considered using buttons to close, but had no time for buttonholes, so sewed on hooks and thread bars — only to get to Costume College and put it on for the gala, and have all the thread bars be useless at holding the hooks! I had to pin myself in with straight pins, but luckily I don’t think it showed much. I need to get more small metal bars so this has permanent closures.

All in all, it was exactly what I wanted – a big, trained, over the top — yet simple and elegant — evening dress (and hey, I got to wear my TIARA!). 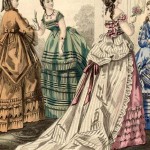 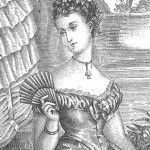 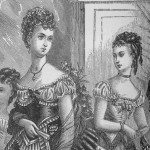 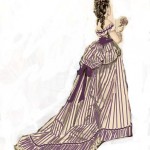 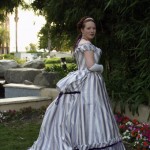 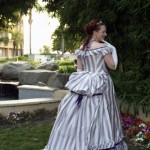 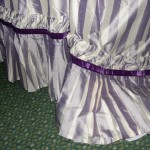 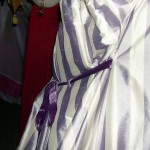 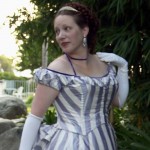 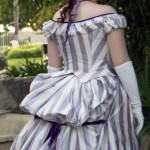 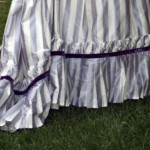