I have put off finishing this dress diary for literally months, simply because I am too lazy to put the dress on the dress form so I can take a picture of a particular construction element.  Well, it obviously isn’t going to happen, so I’m letting that go!

The last thing I wanted to talk about was the skirt. For the first time, I decided to sew the skirt to the bodice — I wanted to see if having fewer layers around my waist was more slimming, plus I’ve now made two dresses with separate bodices and it isn’t THAT much of an advantage to have the skirt separate.  However, I wanted to keep one theatrical element: the flat front of the skirt. It’s far more flattering, in my opinion, especially on a larger girl such as myself. However, it’s totally not historically accurate — what would be would be cartridge pleating all the way around, with a slit down the center front of the skirt and/or a CF skirt seam, so that you can get in and out of the gown.

Jenn has made a few of these trying different solutions.  The one that sounded the most promising was that she gathered the CF of the skirt up on a drawstring. Sadly, she says that it doesn’t work in practice — no matter how tight you try to make the drawstring, the center front piece still sags and she had to do complicated hooks & bars to the underside of the bodice.

So I thought for a few days and then hit on making a fall front, with ties at the sides the way 18th c. skirts are closed. Of course, since the back 3/4 of the skirt is sewn to the bodice, you are only tying off the center front 1/4.  I made a waistband for just that section and attached ties to each side.  I had originally thought I would put my arms into the armholes of the bodice, tie the ties in back, and then lace up the center front — but I found it was too hard to get my hands under the bodice in back, so I cut really long ties that cross in back and come all the way around to tie in front.

So, that’s basically it! I still haven’t gotten around to the new partlet and ruff, but I will — at some point.  The only other fiddly things I need are some velvet ribbon around the skirt hem to protect it from wear, and I need to tack down some more of the shell ornaments because they kept flipping up in back.  Oh, and my girdle kept getting wonky — I think I’m going to to suck it up and do what (I think) Sarah does, which is baste the girdle to the waistline of the gown — which I can finally do, now that everything is one piece!

It was fun to finally have a new gown, and I like the blue, even if the colorway is a bit more muted than I usually go for.  Oh, and my friend Janice named this “the Mermaid Dress,” which I totally love! 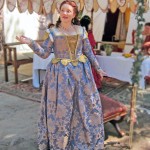 In May, I made a new Venetian Renaissance dress to wear to Bella Donna performances. 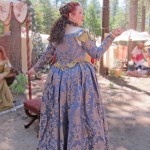 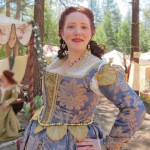 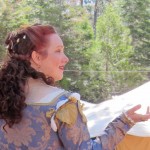 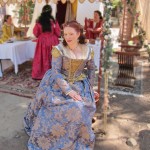 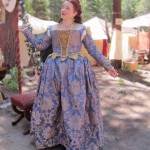